A bit too deep at times but at least relaxed and amenable! 🙂

Anyone who has had a look at the results on bdwp might not understand why I am absolutely chuffed to bits with Daisy after our run at Prestwold Hall, but it was one of those days where the bare numbers really don’t reflect at all how well the day went.
We were stepping up to BE100 for the first time this year. We had one foray into it last year which ended with me on the floor. Hmm.

We trekked to Prestwold the day before to walk the courses. The XC was lovely, mostly very straightforward and encouraging, but there were 4 fences that made me think. A mound up to a pallisade, then run straight down on 6/7 strides to a skinnyish triple brush. Should I mention that she has never jumped a triple brush? There just hasn’t been one of the right size when we’ve gone xc schooling, and I didn’t go and hunt one down. 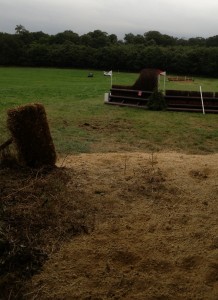 Approach to angled brush… hmm, not exactly right up our street just yet!

There was an interesting ‘hollow’ (we’re not allowed to call them ‘coffins’ any more, are we?!) in the woods, properly old-fashioned, an upright in, land on a little apron on the flat (very kind!), then run steeply down to a ditch (albeit about 4 horse strides down, not one or two!) and then steeply up to a hedge/rail out, the same distance away. So, a very long coffin. Nice. Really educational.
A skinny house… for a mare who isn’t always terribly good at island fences 15′ wide!
And finally, a VERY angled brush. Not quite sure how good our acute angles are! All these with no alternatives, which I might have been tempted to take if they’d been there!

The SJ was in a sloping arena and looked up to height to me, but all distances were excellent and I really liked the way it flowed.

This was the first event my lovely new non-horsey boyfriend went to, so he is to thank for the video and photo efforts… hence, much gratitude from me, and he seemed to enjoy the day (or at least the bacon butties and the cheeseburger!)

Daisy warmed up very sweetly for the dressage, but just wasn’t in the mood to accept my half-halts well… she sometimes displays her displeasure at a gentle half-halt by violently shaking her head to tell the judge that I’ve just attempted to remove her molars. So, I was a bit pathetic about our dressage, deciding that a nice safe amenable test would do for today. I’m playing the long game here… I’ve made the mistake in the past of putting too much pressure on too soon and making an opinionated mare a bit arena-tense.

So I even left the final halt alone, messy as it was, as asking her to square up might easily have made it a lot worse, she was in that sort of mood! I was happy with it because she only had a couple of tiny moments of opinionatedness. Good enough. 🙂 The judge didn’t hate us, we got 6s and 7s throughout and just a 5 for the jogging in the walk, collectives of 7,6,6,7, for 36.0. If I’d felt able to ask more the mark would have been very respectable indeed, but she just didn’t feel ready for that today. 🙂 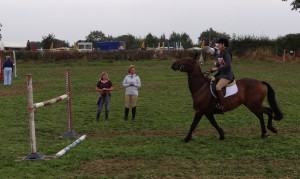 arguing, hollowing, running through the bridle and right past my distance, this did not feel good… 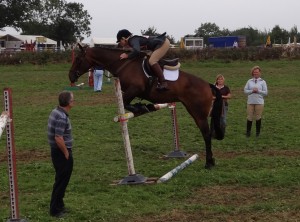 … and so she buried herself, and hit it.

She warmed up okay for the SJ, except for one moment of extreme stroppyness on the way to an upright, when she argued, rushed, and rather buried herself past the distance I’d seen, as you can see in these two pics. She didn’t think of stopping, and didn’t like hitting it, that was something, and she jumped it well the next time, listening to me all the way in!

I expected her to spook violently at the remnants of an old xc fence on the way to fence 1, but she didn’t. Odd. So we started well, but she just got a bit faster and flatter as we went, and hollowed against my half-halts. I think I need to stay lighter in the saddle and find a way to keep her softer. Bit change again too, I think!

She just tapped 2 down behind, but in fact I was really pleased with the round – the changes all worked well, she made a good shape over a lot of the fences, starting to bascule a lot better, we had no disagreements about striding or directions (have been known!), it just needed a bit more acceptance of input from me. I have done far worse rounds that were somehow clear! 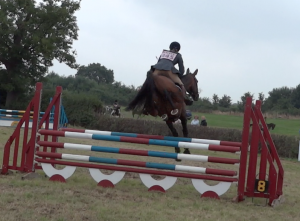 she wasn’t going to touch this one! 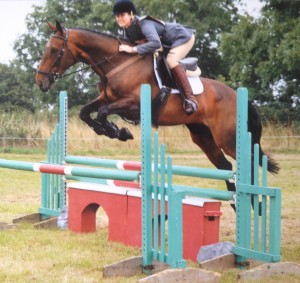 On to the XC. There was a longish hold just before I started, always does wonders for the nerves!
We started well, she was looking for her fences keenly and really enjoying it, and definitely better over the slightly bigger fences of BE100. She was clever at the mound: I don’t mind a stride or two of trot at all, it shows she was thinking, and she was always going forward. She wobbled to the triple brush and I had to do a LOT of correcting but it worked, she was great. 🙂 🙂 🙂 Phew!

The coffin was… interesting! She slowed down obediently when asked and popped in very nicely, eyed the ditch up all the way down the hill and then just launched upwards it, very bravely… she wasn’t going to stop for anything but obviously thought it was a bit of an eyeful so needed clearing by at least 4′ or so, just in case!
I was expecting this so sat tight (thank you, Butet!!!), I wish the tog had been there though, I think it got a gasp and a laugh from some of the spectators! She went up the slope afterwards well, and jumped out fine. Great.
I deliberately let her get a little deep to a few of the easy ones, which stopped her getting too carried away with her own amazingness… I think it’s important that they realise, while the fences are still small, that they have to pay attention and that they know how to get out of trouble, and that the stride won’t always be perfect (this is something I was taught to teach them a long time ago, and it has stood me in very good stead!) 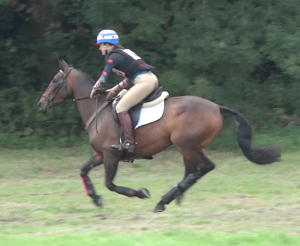 She was very good to the skinny house, which I angled into slightly away from the run-out side (it was up against the Novice fence on the right), and up the steps, and then we came to the very angled brush. I’d already planned to go very slowly through the gateway just before it, as there was a bale of straw resting up against it to protect horses from the post, just the sort of thing she shies violently at at canter, so when she dropped to trot early in the woods, due to my half-halts and the spooky cream crushed stone put down, I left her in trot to make sure we were very organised through the gap! So, we lost quite a bit of time, but it was worth it. We trotted through the gap, wiggled left then right to get straight rather than going on the acute angle and risking a run-out (it had been causing problems all day), she slipped a bit behind despite trotting, and we got there on a bit of a nothing horrid stride… but she still jumped it well. I was delighted. We cruised down the hill, steadied to pop the last and then I let her have her head to finish… and had real problems pulling up, she was having a whale of a time. 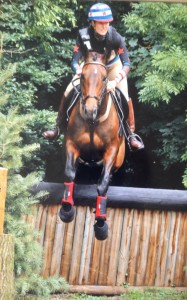 She’d given me the real feel of a good xc horse: thinking, bold, clever, looking for her fences and having fun. I think there’s a lot to come from her, and she really reminds me SO much of my best ever mare… I am sure that’s not delusional thinking, no other horse ever has!

The scoreboard later showed 38.8 time penalties, which I queried immediately, as I’d expected to get about 10 or so, and I like to check the clock in my head is about right for the different levels/speeds. Sure enough, it was soon amended to 14.8, which was a lot more like it, especially considering the fact that we trotted through the woods!
So, no disasters or strops all day, and a really fun clear XC. She learnt a lot, and we both finished with huge smiles on our faces. We ended up 11th, thanks to the small sections BEDE run at the lower levels. I’m very happy, and Keysoe have already changed my BE90 run for a BE100, so we’re staying at this level for our next run.
Now it’s two days later and I’m still buzzing about how good she felt xc… 🙂 🙂 🙂 Eventing: the best sport in the world. Love it.