There are never any short cuts with horses but there are tools which are useful at the right time. In my tool box is the Harbridge.

I am not a huge fan of draw reins as I find they tend to encourage horses to sit behind the vertical and you quite often get a fake contact. Yet there are often times when you are struggling to get smoother  transitions without the horse throwing its head up, or you are trying to teach the horse to stay rounder and softer consistently and just need a bit of help with the message. 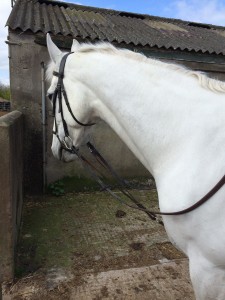 This is where the Harbridge is a really useful bit of kit. I have now used a Harbridge on quite a few horses. My last horse used to shove his head up in trot to canter. Lots of different methods were tried but ultimately he was being a little bit rude about it and needed to be shown he could do it correctly. The Harbridge was worn for a couple of schooling sessions and he stopped hollowing in the downward transition and learnt to stay soft and round without a battle. The grey mare has been schooled in one recently because she gets tense thinking she is going to canter and I wanted to be able to ride her through the tension without a battle.

The Harbridge allows you to keep a consistent contact and only comes into play when the horse lifts their head above the desired angle. It means as a rider you can reinforce all the correct aids and contact for the horse so when the horse has it taken off nothing has changed in terms of the contact etc.

As with any training tool it also has its negative aspects. I would never use it on a horse is prone to standing up or one who will panic in it. You also need to make sure its not too tight and that you keep the neck out. I also would never jump in them though I have used them for pole work. They are not suitable for every horse but for me I would choose the Harbridge over draw reins every time.

On a horse who has never worn one, I tend to get on in an arena without them attached and then ask a helper to attach it after having warmed the horse up. They are also loose when I start using them and get tightened as appropriate. I don’t want the horse to panic or feel constricted so I never have them on particularly tight.